Actually, now that I think about it, I’m surprised Goldilocks and the three bears didn’t make an appearance…

This is one of those “two birds, one stone” or “two books, one blog” blogs. This is because I ended up reading two books at once last week (something I was forbidden to do in the third grade after an unfortunate mix-up between Mr. Poppers Penguins and Mary Poppins). I am also very tired right now and basically writing this in effort to keep my eyes open until an appropriate bedtime…

Let’s start with The Woodcutter, which I special ordered in… because it had a beautiful cover.

The Woodcutter by Kate Danley

They have since redone the cover which is why the only picture I could find of the original cover is small and blurry. Anyway, it’s also about fairy tales, which I normally love. However, this book somehow crammed every single fairy tale ever written (minus Goldilocks) into 250 pages. It was clever, it flowed well, it was enticing, and honestly a little overwhelming.

After finding Cinderella scared to death (literally) in the forest, the Woodcutter, protector of the Wood and the 12 Kingdoms, sets out on a quest to kill the offending beast (whatever it may be). Along the way he encounters pixies (including their leaders Oberon and Titania), Snow White, Rapunzel, Rumplestiltskin, Red Riding Hood, Jack and the beanstock, giants, *deep breath* the princess and the pea, Odin and his hellhounds, the billygoat gruff, the troll under the bridge, the twelve dancing princesses, the red shoes… etc. However, he soon discovers that the beast is only half the problem – an evil Queen has been capturing pixies and gathering their magic dust to increase her own (stolen) power. The Woodcutter must save the pixies (and in turn the Wood itself), return the rightful rulers to their thrones, capture an errant hellhound, and overall rid the land of evil. All in a days work.

For some reason I was finding it very hard to get into this book, it was a fast read (mainly because each chapter was approximately one page long), but characters came and went so quickly that it was hard to get attached to any one of them. There was also such a multitude of characters and quests springing up on every page that it was hard to keep track of the actual story… almost as if the author was trying so hard to squeeze in every fairy tale that she forget there was a plot line taking place beneath it all. Like I said before, the story was very creatively spliced together and well written, it was just fairy tale overkill. 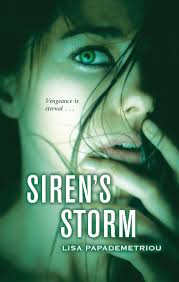 I ended up reading this book because I forgot to take a book to work and I always, always, always read on my breaks. I live too far away to go home for lunch so I escape the confines of the retail world through books. Naturally when I realized I forgot to bring a book I panicked… until I remembered I work in a book store. I hastily grabbed the nearest teen book I could find and cracked it open. I didn’t expect to like it enough to finish it (I should have known better, I almost always finish books, even if I hate them), but I ended up reading the entire thing over the course of the week. And I didn’t hate it, I actually somewhat enjoyed it…

Will’s brother Tim disappeared one year ago when the two boys were out sailing off the beach near their house. Will doesn’t remember the incident, he only remembers waking up on the beach with a bloody face and a flaming sailboat, but no one in the small town of Walfgang believes him. Except Gretchen. Gretchen is Will’s best friend. She is also an incurable sleepwalker who finds herself waking up in some very strange places. Her dreaming body is inexplicably drawn to the ocean while her conscious self is terrified of it. In effort to take her mind off things she takes up a summer job at a local café, there she meets Asia, a green eyed vixen with long black hair and melodious voice… who has an incredible ability to control people without a single touch. Asia is new in town and the residents are mystified by her swift arrival. Will swears he saw her crawling into the ocean in the middle of a hurricane, but even stranger things begin to take place in the town of Walfgang

One thing I will say about this book, there is no silly, stupid, mushy gushy teen romance. I was actually able to enjoy the story without Will getting sidetracked by Gretchen’s boobs or Gretchen getting sidetracked by Will’s lips. (The author is a little awkward about switching point of views but you get used to it). In fact, aside from being hormone happy high schoolers, all the characters were very down to earth and believably human. Both Will and Gretchen were affected by Tim’s disappearance (though neither realizes exactly how much or why). They have just reached that awkward stage between childhood friendship and newly developed romantic feelings, unfortunately they are forced into a situation far beyond their control before those feelings can come to fruition. Asia is mysterious and not decidedly good or evil – we soon discover she has her own past to contend with. While Will and Gretchen battle their inner demons, Asia prepares for a battle with demons that are all too real. Their reactions are as realistic as they can be for a paranormal teen fiction novel in which Siren’s attack the town.

I also liked the subtle references to other classic mythological tales, namely the Odyssey and Dracula. If you end up reading the book, check out the authors note.

The only real downfall to the story is its predictability… which is evident from page one. SPOILER ALERT: Asia is a siren. Okay, that’s not really a spoiler, it was pretty clear from her first appearance. She pops up in the middle of the road in a hurricane then slithers down the rocky beach and into the water. She never really tries to hide what she is. Gretchen keeps dreaming that she’s running towards water and wakes up standing at the edge of a bluff, high above the ocean. She’s taken to humming a haunting tune that makes Will think of the day Tim disappeared. It doesn’t take a literary analysis to figure out that Gretchen is somehow involved. The ending with pretty anticlimactic… nothing really happened that I didn’t already anticipate. There is a sequel but I’m not sure I care enough to read it. Overall it wasn’t half bad and I would recommend it but I would also recommended that you keep your expectations low.