I’ve said it before and I’ll say it again, I’m a sucker for a colorful cover and swirly font. That being said I usually pick up a lot of teen titles… and I’m usually disappointed, or mad. Often just plain annoyed. I read them because I know they’ll be fast and easy (not a good excuse for someone who studied classic literature in college) and because their covers are so dang pretty. You can’t walk down the teen aisle of a bookstore without being bombarded with vampires, fairies, and princesses. However, once you crack them open you’re bombarded with teen angst, unrequited high school love, and undead boyfriends. I recently read Abandon by Meg Cabot and I think I rolled my eyes the entire time. Anyway.

Under the Never Sky by Veronica Rossi 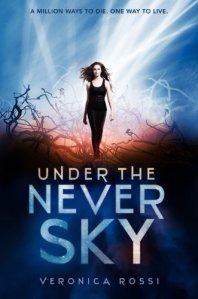 Yes, I gave this book 5 stars. Yes, it’s a teen book. No, there were no princesses or fairies or undead boyfriends. One of the best dystopian novels I’ve read so far. The only thing that makes this a “teen book” is the fact that the main characters are in their teens.

The story is told from the perspective of Aria, a dweller, and Perry, a savage. Aria was born (and by born I mean genetically engineered) and raised in a dome, an enclosed civilization designed to protect it’s inhabitants from the Aether – a vicious Aurora Borealis (from what I could gather). Everything in real life is grey, dull, and man-made. The people in the domes entertain themselves by spending all their time in the realms – basically the internet (ha!). In the realms they can be and do anything they want. They enter the realms using their iPhones (okay, not really. But it’s a sort of iPhone device that literally sits over their eye and allows them to communicate, play games… whatever). Aria happens to capture a bit of incriminating video on her smarteye and is expelled from the pod, left for dead in the desert – if the cannibals don’t get her, the electrical storms caused by the Aether will. Luckily she meets Perry, an outsider who needs her to get to his nephew who was taken hostage by the dwellers. The outsiders live in tribes compromised of wooden huts and ruled by a blood lord. Many of them have developed superhuman senses (Perry’s happens to be night vision and an extreme sense of smell).

At first Aria and Perry hate each other, she thinks of him as a inhuman savage (probably due to his wolfey tendencies) and he thinks of her as an emotionless, irrational, inhuman robot. But this is a teen book we’re talking about, of course they’re going to fall for each other. You knew that. I knew that.

I can’t explain why I liked this book so much, I liked the main characters – they didn’t make me roll my eyes once. I liked that the story was just as character driven as it was plot driven, most teen novelists don’t bother to develop their characters or give them any emotional depth or allow them to grow, Rossi does. The plot was complex and compelling, it didn’t focus on Aria and Perry’s romantic relationship. There were several points in the book when I thought to myself “Where can they possibly go from here? How can they possibly get out of this one?” But they do. And I loved the ending. I had to reread the last few sentences a few times before I was willing to shut the book on them. I want to read the sequel (and I probably will) but I don’t want to ruin the magic of that last page.

One thought on “Under the Never Sky”